Home » News » What did YOU want to be when you grew up?

What did YOU want to be when you grew up? 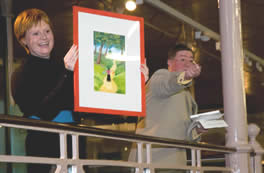 On 21st October 2009, Trust in Children’s When I Grow Up exhibition displayed artwork illustrating the dreams and ambitions of TiC-supported children. When I Grow Up was held at the V&A Museum of Childhood and attended by over 150 guests and raised over £2000. Chair Iain Forbes introduced TiC followed by guest speaker Dr Alan Borg, who formally opened the exhibition before leading a rousing auction of five of the trustees’ favourite works of art, which raised nearly £400.

The artists are TiC-supported children from Bosnia, Malawi, the Democratic Republic of Congo, the Philippines and Peru.They hope to enter a huge range of professions, including lawyers, pilots, police, seamstresses and nurses. Through the help of TiC and our supporters, WE can help THEM to achieve their dreams.

The interactive Wall of Ambition showed the ambitions of guests and celebrities.

“As a child, when I grew up I wanted to be a lawyer” – Shami Chakrabarti, Director of Liberty

“I wanted to be a prime minister/bar manager/ surgeon” – Joanna Lumley, actor & supporter of TiC

“I wanted to be a deep sea diver” – Loyd Grossman, television presenter & chef

“I wanted to be a baseball player” – Bill Bryson, author

Thank you to everyone who attended When I Grow Up and helped to make it such a special night.Especially to Andy Colvin, pro-bono photographer for the event and Melissa March, who donated one of her fabulous works of art to When I Grow Up.